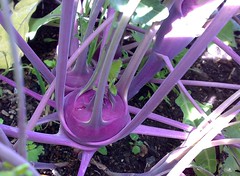 Since I did this website for Fields Farm, Jim and Debbie are nice enough to kick me down some of the Fields Farm cornucopia.  When they offered me some Kohlrabi, I confessed that I had never tried it before.  Kohlrabi seems only to be introduced to the US food supply by the Farmer's Market/Organic Foods movement, Mom didn't cook it when I was growing up unless it was in one of those Hamburger Helper packages.

I was struck by the appearance of the phosphorescent purple orb with symmetrical tentacles coming out of it from all directions.  It looked like something that you would find on the cover of a Yes album.  Debbie told me you cut it up and cook it like any other vegetable.  Kohlrabi has been compared to broccoli stems in that it absorbs the flavors of what you cook it with, turnips in that it is a bulbous shape and you can eat the greens and to eggplant in that its purple on the outside, white on the inside, roundish and you have to cook it to soften it up.  But those comparisons are not even as close as saying a mango is like a peach or any exotic meat tastes like chicken, Kohlrabi is pretty unique.

At the Farmer's Market yesterday I asked Jim why he does Kohlrabi.  He said it is beautiful and that it loves the cold.  It can grow in the spring and in the fall here and won't suffer with our inevitable frosts.  I got a couple of more Kohlrabi to stuff in my panniers and take home with me.  Meanwhile going on simultaneously and coincidentally Debbie puts a Kohlrabi recipe up on the site.  I discover it when I get home and try it out for dinner.

It is probably obvious that I have been searching Kohlrabi, and one thing I found went on ecstatically about pureed Kohlrabi.  Debbie's recipe didn't mention that, but it was the same basic idea.  So I diced up a Kohlrabi, fried it up with a head of the young garlic that I recently got from Fields Farm, in a good amount of olive oil and some salt and pepper.  I had some fresh sage that I got from the Farmer's Market.  I love sage, but sometimes it is hard to figure out what to cook with it--I think I had a match here.  I grabbed a bunch of leaves, threw it in and pureed it.  I was too lazy to bake like the recipe said, so I just grated some cheese on top of it.  That was fine and it was steamy enough to melt the cheese.  Wow.  It was incredible.  I finished eating it all up before I touched anything else on my plate!

In the impetus these days for local food, I think maybe Kohlrabi can be something significant in the Northwest cuisine.   For instance a basic technique in cooking is using a mirepoix.  Mirepoix is a finely diced mixture of onions, carrots and celery that is a base for sauces and other foods.  It is a french technique but is also a part of elemental foods such as Bolognese Pasta Sauce.  Celery takes 5 months to grow and is very sensative to frost.  Guess what? that means you cannot grow it here.  I hereby propose that for the Northwest Mirepoix we replace the celery with Kohlrabi!  I will be eager to try this variant of Mirepoix out as well as other ways to cook up some Kohlrabi.